Powerbanks come in all imaginable designs and sizes: large, small, with a lot of power or little, with one connector or even three. There's just one crucial catch: what happens when the power bank is empty? Thanks to modern solar cell technology, this problem is now also a thing of the past.

Thanks to solar energy, you are completely independent of external energy sources, at least as long as the sun is shining. Below we have taken a closer look at 5 models.

This high-quality solar power bank is equipped with a total of two USB ports. You can use the input with up to 2.1 amps and thus charge two devices at the same time, which represents various advantages in practice. It does not matter if you want to charge your smartphone and tablet at the same time.

The general battery capacity of this model is 26,800 mAh. Thereby, this battery is composed of high-quality Li-polymer cells, which provide a solid capacity. However, thanks to the 4-way solar panels, you don't necessarily need a power outlet to supply the battery with energy. In fact, the solar panel provides automatic charging even in sunlight. 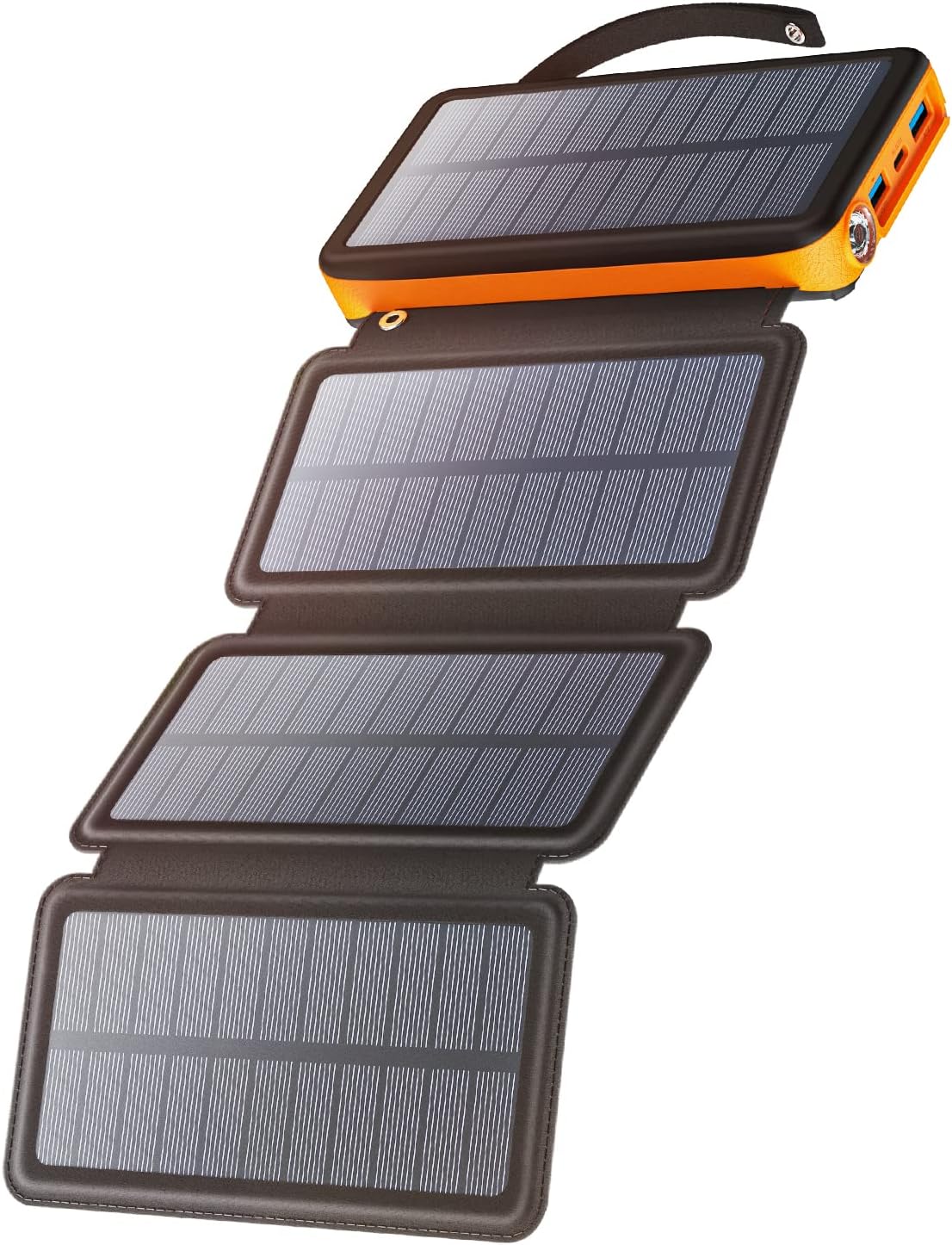 SOXONO is a solar power bank with a lithium polymer battery and a battery capacity of 30000 mAh. According to the manufacturer, that's enough to fully charge most phones five to six times. The power bank has one USB port each with 2.1 and 1 amp. This allows it to charge two devices at the same time.

The SOXONO can be charged not only via sunlight but also via a USB cable. According to the manufacturer, a full charge via the 2.1-amp USB port takes 8 to 10 hours. For safety, the solar power bank has overcharging, overheating and short-circuit protection. 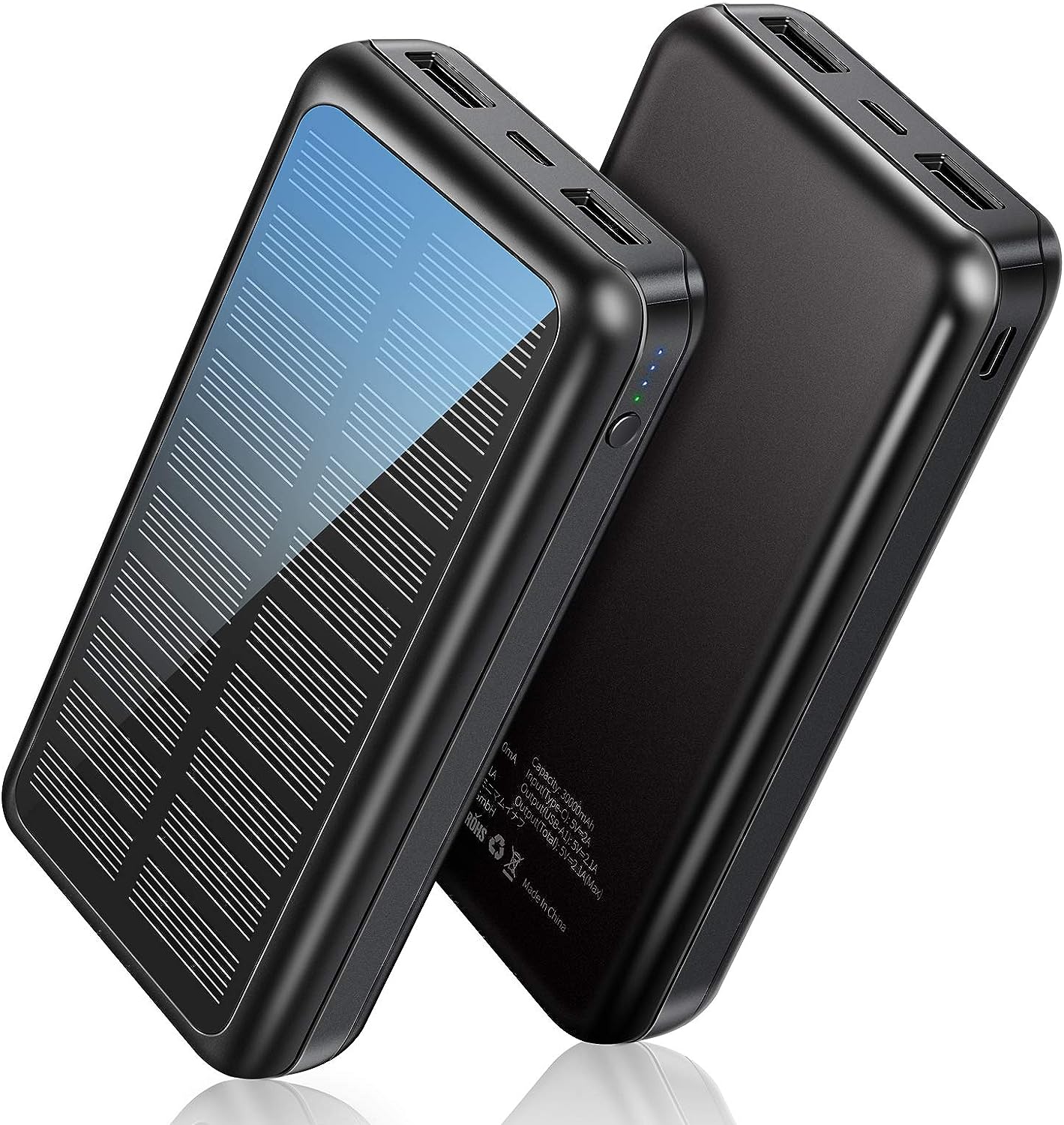 The highlight of the BLAVOR solar power bank is not only the integrated solar panel but the possibility to charge devices with Qi technology completely without cables. If your smartphone or tablet supports this technology, you can completely do without carrying charging cables. All you have to do is place the device you want to charge on the power bank and the charging process starts.

The Wireless Powerbank from BLAVOR has a capacity of 10,000 mAh, which is less than half compared to the previously presented devices. However, this power bank shines with other features. Besides the Qi technology, it is for example the built-in USB-C port. This ensures that you can also use newer charging cables for charging. 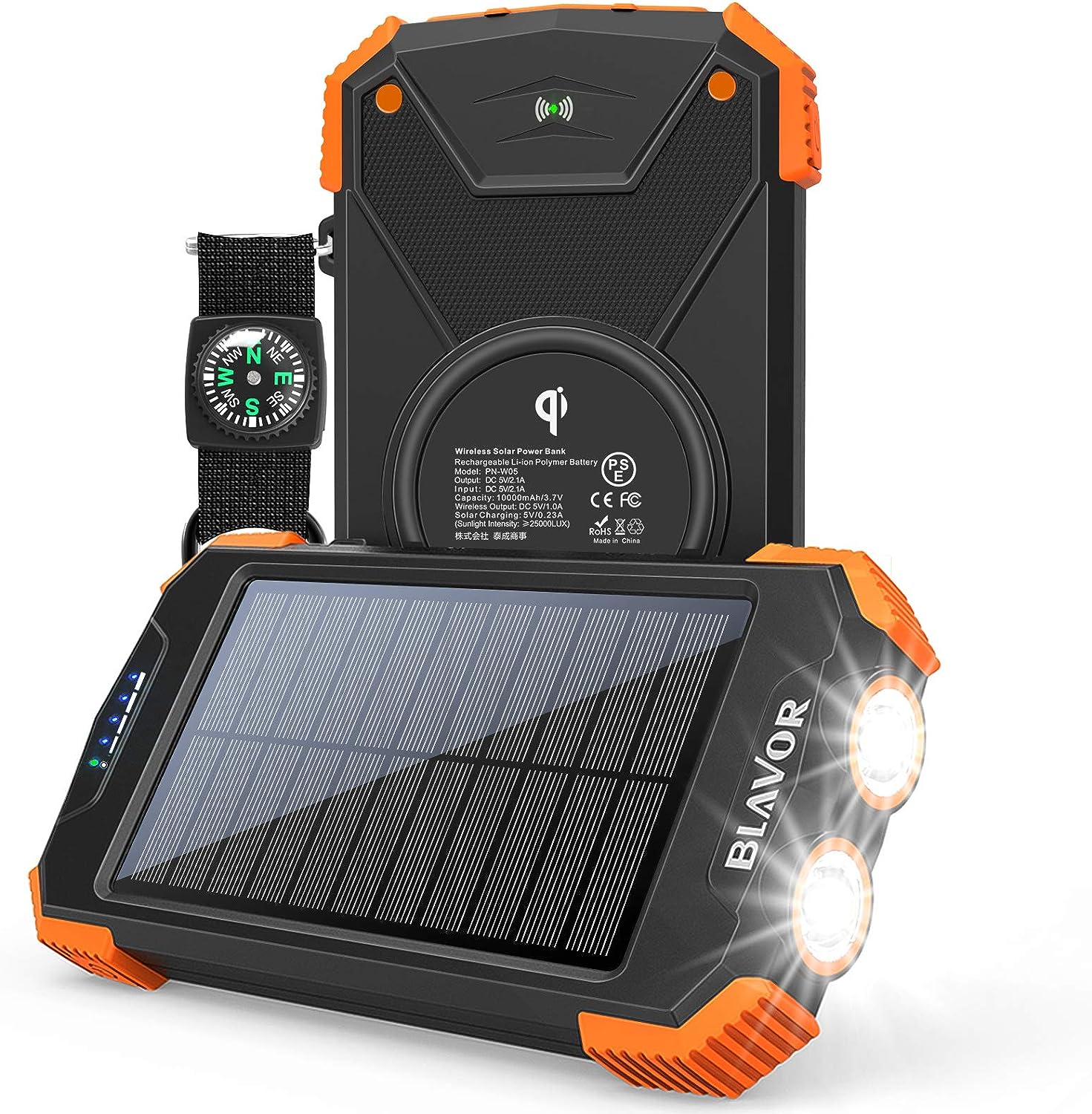 DJROLL is a solar power bank with a lithium polymer battery and a large battery capacity of 36,000 mAh. It has two USB Type-A ports and one USB Type-C port. Combined with its wireless induction charging feature, it can charge up to four devices simultaneously. With an IP66 rating, DJROLL's solar power bank is protected from dust ingress and heavy splash water. This makes it a good choice for outdoor use. 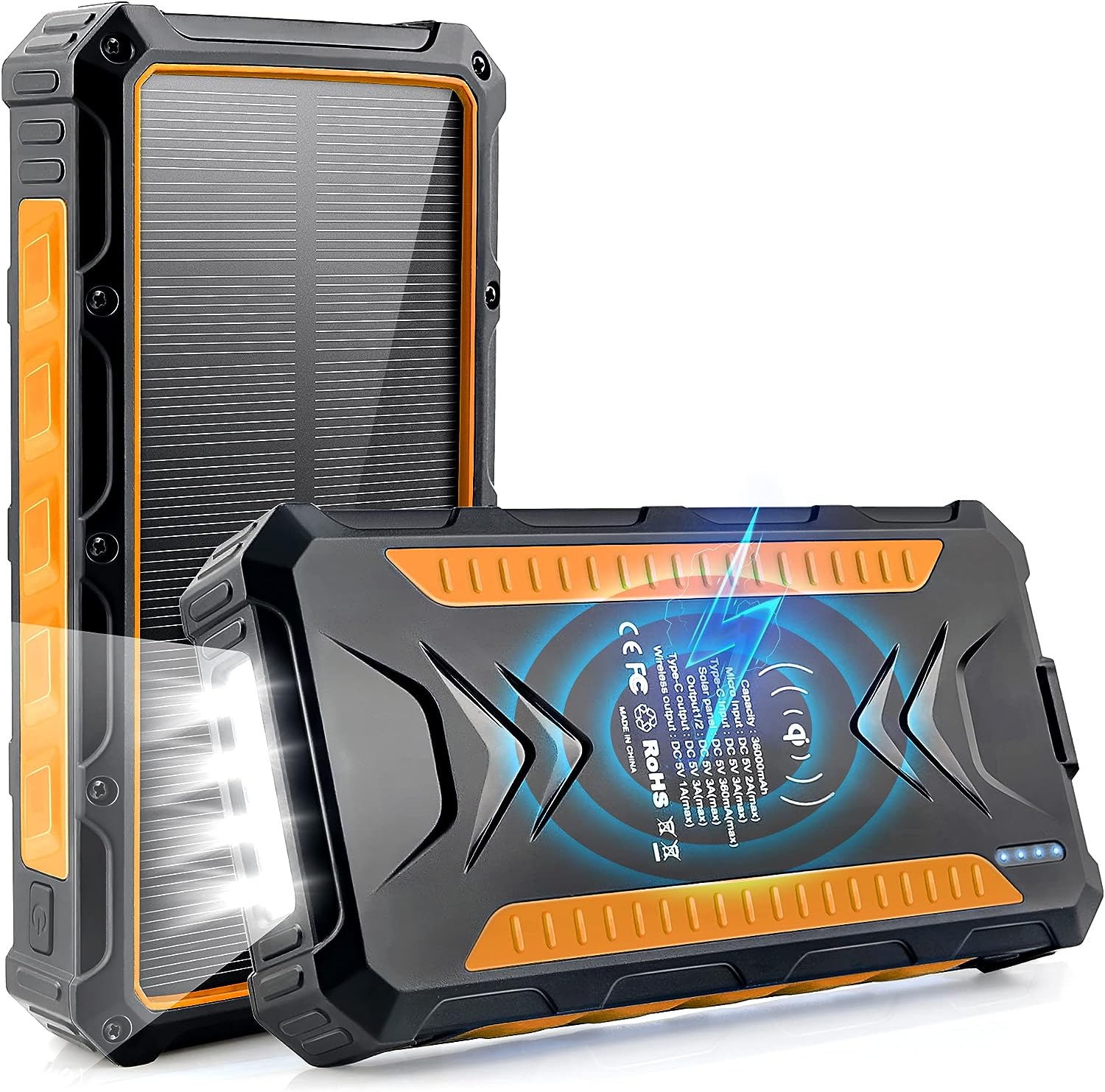 The JIGA solar power bank has a capacity of 30,000 mAh to charge cell phones, tablets, etc, several times in a row. According to JIGA, the device supports simultaneous charging of up to three devices and can itself be charged via any USB-C, micro USB, or Lightning cable - in addition to charging via solar energy via the integrated panel. This solar power bank has a total of four inputs and three outputs, each with a voltage of 5 volts and a current of 2.1 amps.

According to the manufacturer, the power bank has a built-in smart chip and hardware protection that automatically selects the correct charging setting depending on which device is currently connected. Overcharge and overcurrent protection are said to provide maximum safety. The power bank is made of PVC double-layer material and has a tin-plated surface - this is supposed to make the power bank robust and protect it against scratches. 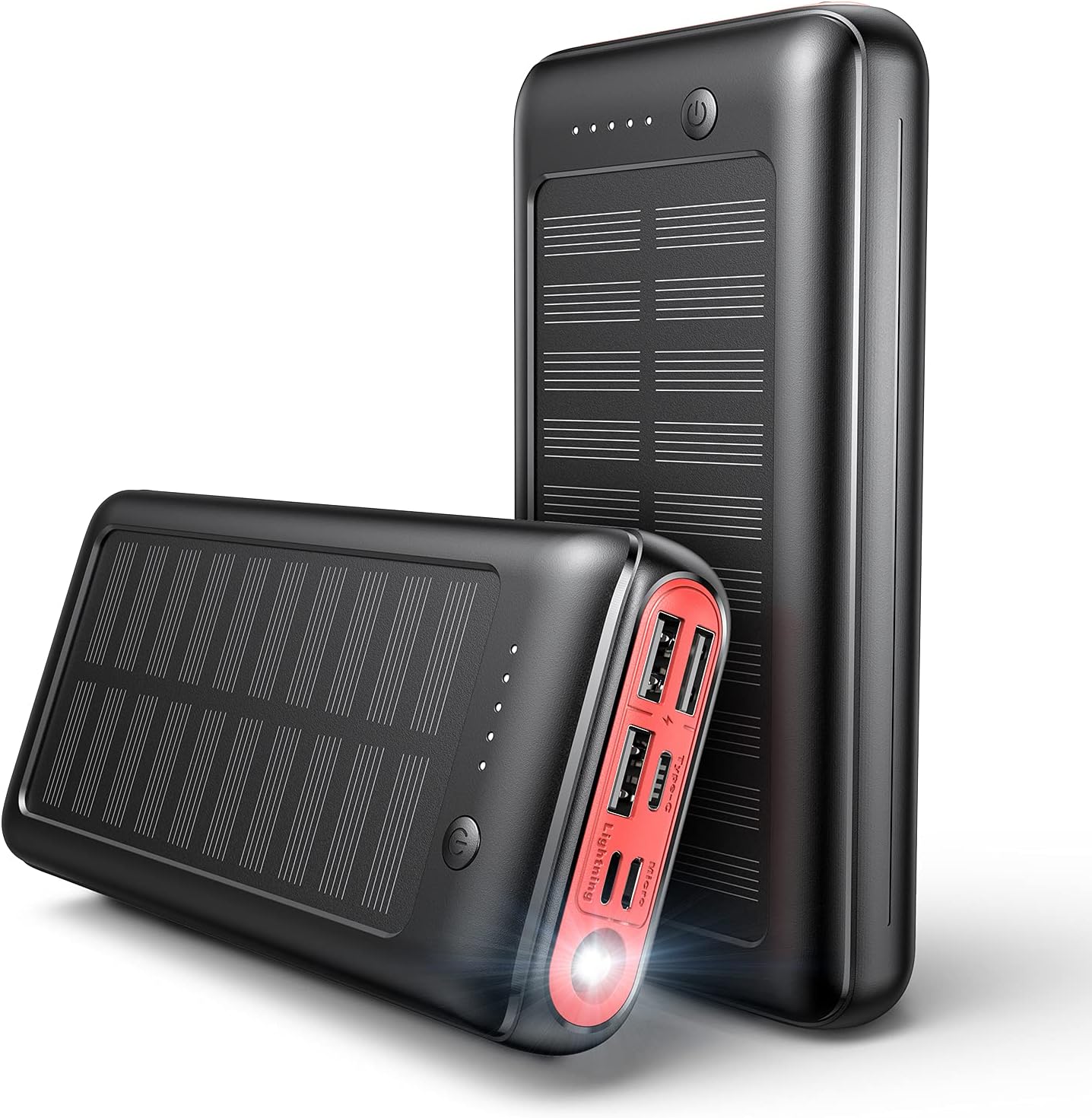 How to choose a solar power bank?

The most important criterion for a power bank, whether solar or not, is the total capacity of the battery. This determines how often you can recharge your devices. Most of the models we've reviewed have a capacity of more than 20,000 mAh. How often you can recharge your smartphone with that can be calculated pretty quickly: the battery of a Samsung Galaxy S7 has a built-in battery with a capacity of 3,000 mAh. Accordingly, you could completely charge this battery 8.3 times with a 25,000 mAh power bank.

However, this is only a theoretical value, because you continue to use the device during the charging process, which reduces the number of possible charges. And depending on what you do with your smartphone, it will consume more or less energy.

Why is the complete capacity of the power bank not available?

A battery never releases its complete power. Depending on the temperature, the real capacity fluctuates. In addition, the mAh specification of the manufacturers refers to the voltage of the installed batteries, which is 3.6 volts. However, the voltage of a USB port is 5 volts. Thus, a conversion of the voltage - in this case an increase - has to take place. It depends on the quality of the converter and how much capacity is "lost" in the process. 100 percent is practically impossible to achieve.

If you have ever been on the road for a long, then you know that every gram counts when packing equipment. Hikers who spend weeks in the great outdoors invest a lot of money in equipment that is as light and efficient as possible. Of course, this also applies to a power bank. Whether it weighs 1 or 0,5 pounds actually makes a big difference. After all, you'll have to lug around the extra pound for days on end. With a backpack weight of between 30 and 50 pounds, every little thing makes a difference in the long run.

Therefore, you need to choose carefully and find a good compromise between capacity and weight. Keep in mind that you won't be using your smartphone all the time on long hikes, and you may well turn it off for longer periods of time. By actively saving energy, you ensure that you do not need the power bank as often.